Pick n Pay to launch service with Takealot’s Mr D app, Retail giant Pick n Pay has concluded a commercial services agreement with the Takealot Group, which will see the launch of a dedicated Pick n Pay on-demand food, grocery and liquor offering on the Mr D app, which currently has over 2.5 million active customers.

This emerged when the group today launched its new strategic plan, which CEO Pieter Boone described as the “biggest and most important change in Pick n Pay for many years”.

The goal of the four-year plan is to deliver group turnover growth at a compound annual rate of 10% – resulting in market share growth for the group of at least 3%.

The group says it has also pledged through the plan to increase its profit before tax margin to above 3% by FY26. 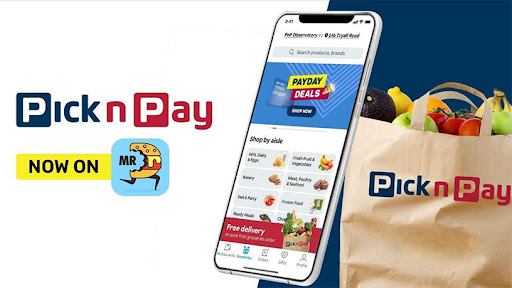 In a statement, Pick n Pay says the dedicated on-demand service on the Mr D app will launch in August and will be available nationwide by the end of the current financial year.

Says the retailer: “The group sees this new offer as a decisive initiative in its plan to grow significantly in the fast-growing online food and grocery market.

“The new offer will benefit from Pick n Pay’s expertise in food and grocery, and its nationwide store network.”

According to the retailer, its Smart Shopper loyalty programme will be integrated into the offer, with customers able to earn points when shopping for Pick n Pay groceries on the Mr D app.

“Pick n Pay will bring its tremendous expertise in running fresh food and grocery, its nationwide store network, and its leading Smart Shopper loyalty programme. The Takealot Group will bring its proven ability to satisfy online, its technical expertise, and its unrivalled delivery network,” the retailer says in a statement.

Under the agreement, when customers open the Mr D app, they will be offered the choice either to “buy groceries” or “buy food from restaurants”.

Customers will be able to browse and select the items they want to buy, and conveniently create their baskets.

Once the order is submitted and paid, Pick n Pay will pick and pack the order from the closest Pick n Pay store. It will then be collected by a member of the Takealot delivery fleet and delivered to the customer.

The Pick n Pay Smart Shopper loyalty programme will be embedded in the Mr D app so that customers will be able to earn points when buying Pick n Pay groceries on the Mr D app.

Pick n Pay CEO Pieter Boone says: “This is a great day for customers. Pick n Pay already offers an excellent on-demand grocery service through asap!. By working with the Takealot Group, customers will now be able to benefit from a bigger, better, faster and more exciting offer. It will be the best of Pick n Pay now on Mr D, and benefiting from Takealot Group’s industry-leading platforms and service standards.

“Alongside other initiatives we are announcing today, this is a new era for Pick n Pay and for its customers. There is huge potential for omnichannel retail in this country. Through this agreement with Takealot, we intend to regain market leadership in online grocery, and to do so in a sustainable and profitable way. We plan to increase our online revenue eight-fold by FY26.”

Takealot executive chairman Kim Reid says: “We are hugely excited to be partnering with the brand and the people at Pick n Pay, who share our values at the Takealot Group. Mr D’s 2.5 million customers will be delighted to see a Pick n Pay grocery offer on the platform.

“The combination of Pick n Pay’s reach, quality and pricing, together with Takealot Group’s leading technology and scalable delivery network, is a recipe for success. Scalability will be a huge advantage. Takealot Group, at peak, currently delivers over five million packages per month, with the ability and ambition to serve many more customers as demand for this offer grows.”

The two parties intend to launch the service on a trial basis in the Cape Town area in August and to roll it out rapidly across the country. The service will be available nationwide by the end of FY23.

The group reported a resilient performance in a year marred by civil unrest and some continuing COVID restrictions on the sale of liquor.

In a statement, it says group turnover increased by 5.2%, despite an estimated R2.7 billion in lost sales arising from the civil unrest in July 2021 (R1.8 billion) and the trading restrictions on liquor mainly in the first half of the year (R0.9 billion).

According to the retailer, the relaunch of the on-demand grocery offering as Pick n Pay asap! delivered growth of over 300% since August 2021